Incredible Comeback Pushes Harvard Past Princeton and Into NCAAs 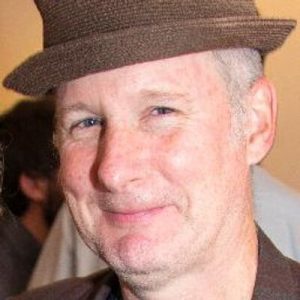 CAMBRIDGE, MA. It was an impressive comeback by any measure, let alone one in a championship match with an NCAA berth on the line. 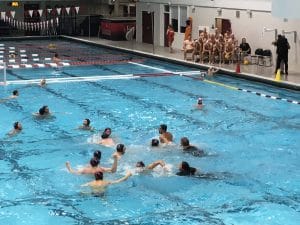 Down four goals at the half, the Harvard men’s water polo team outscored Princeton 7 to 2 after intermission to shock the top-seeded Tigers 11-10 in sudden-death overtime.

The win gave the Crimson their a second-straight Northeast Water Polo Conference title and set up an NCAA play-in match on Saturday in Cambridge against George Washington.

Water Polo Planet took in action with brothers Jonas and Liam Veazey. Currently a junior on the St. Francis Brooklyn men’s team, Jonas has played polo since being introduced to the sport as an eighth-grader growing up in the suburbs of Dallas, Texas. Liam, a 2015 St. Francis graduate, was a member of the back-to-back (2012, 2013) NCAA Final Four participants. Comments after the match by Harvard Head Coach Ted Minnis provide a complete portrait of an exciting and unpredictable contest.

When play resumed, Blyashov ripped a rising shot past Princeton goalie Vojislav Mitrovic to cut the Tiger lead in half, but a minute later Princeton’s Jordan Colina scored on a power play. Matt Payne’s goal gave Princeton a three-goal lead, and a long shot by Colina, the Tigers’ leading scorer, pushes his team’s lead to 4. With two and a half minutes to go, Blyashov again beat Mitrovic, making the score 5-2 at the end of one.

“If we’re going to get down, this is the time to do it,” is what Minnis told his team. Apparently, they got the message; Princeton added to its lead in the second period.

The focus of Harvard double-teams, Duncan had yet to score. Constant pounding from Sechrest and other defenders takes a physical and emotional toll. Jonas explained that—because referees have a quick whistle—from a young age water polo players learn to keep in control of their emotions. He says that Duncan, a Mater Dei High School teammate of St. Francis’s Will Lapkin, as: “Someone who can take any punch or kick and keep playing unfazed by the abuse—which he was taking quite a bit of.”

“All the attention paid to Duncan has opened up outside shooting lanes for his teammates,” Liam adds.

Early in the second period, as Colina got ahead of the Crimson defense, Jonas shouts: “That’s a goal!” Sure enough, Colina beats Ridgley to his right. With his team trailing by four, Minnis again calls for time. Jonas contrasts Harvard’s current prospects with last year when the Crimson had a class of seniors — including Noah Harrison, a fifth-year player that Liam also played against — who waited their whole careers to win the East, which they did in 2016.

At this point, it doesn’t appear that Harvard has much chance of repeating as conference champs.

Sechrest gets on the board with a power-play goal at 5:47, and when senior Harry Tafur converts a breakaway, the Crimson are now within two goals. But Duncan breaks free of his Harvard shackles for a 2-meter goal off a brilliant assist from Wilson, and when Colina again gets free on the break, he scores with nine seconds left in the half to give Princeton an 8-4 lead.

“At halftime, we talked about breaking it up into two quarters; to get two goals back in the third and make it a two-goal game with eight [minutes] to go,” Minnis said about his comments at the break. As it turns out, his team does him one better in the third.

Two minutes into the period, Sechrest converts on what Jonas calls a “classic” Harvard play: a cross-drive pick and then a pass to a now-open Sechrest, who beat Mitrovic to his left. 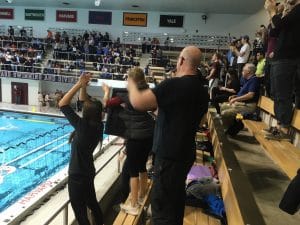 Fired up by a large contingent of Harvard fans, sophomore Charlie Owens fights off a defender in front of the Princeton cage and slams the ball home to cut the Crimson deficit to two—and promptly earns a yellow card for celebrating. Colina calms the nerves of Tiger faithful in the stands—including his parents and brother Julian—scoring his fifth goal, beating defender Nick Bunn with his team enjoying the man advantage. Jonas pointed out that Bunn is known for offense, not defense, and credits Colina with a smart play.

The goal provides only a momentary respite from the Crimson onslaught, as Harvard catch a huge break at the three-minute mark. Shot by freshman Jackson Enright is partially field blocked by the Princeton defense, fooling Mitrovic, who cannot stop the resulting lob from dropping behind him. When Blyashov follows a minute and a half later with an absolute rip shot past the Tiger goalie, the Crimson are trailing by one, and the fans at Blodgett Pool are in a frenzy.

Princeton is getting beat on the scoreboard and in the pool; Liam and Jonas cite an obvious missed call: the steal that resulted in Blyashov’s goal should have been an ordinary foul with the Tigers maintaining possession.

In between periods, both brothers observe that Princeton is in a classic downward spiral: pressing, taking bad shots and forcing the action. “You get away from yourself when you make individual plays,” Liam said. “Water polo is a team game.”

Jonas says the Tigers just need to calm down and play their game. When Duncan gets an exclusion on Harvard’s first possession of the fourth period, the Princeton head coach, Luis Nicolao does the opposite; drawing a yellow card from referee Jamie Wolff. The visitors go up by two halfway through the period on a Payne goal. 90 seconds later the Crimson get the goal back on a power play, as Owens solves Mitrovic to his right.

Nicolao called his final time out on his team’s next possession, ostensibly to prep his team for the final two minutes of play. It almost works; Blyashov shot over the Princeton cage, and the Tigers were stopped by Ridgley.

With 58 seconds remaining, Minnis used his last time out to insert a play—a move that proved decisive. When play resumed, Harvard goalie Ridgley lobbed a perfect pass to Owens “ball hawking” in front of the Princeton cage. The Wilton, CT native slammed it past a surprised Mitrovic and—just like that—the match was tied at 10-all.

Jonas cited a breakdown in communication that left Owen open.

“When you play defense against Harvard you have to communicate with each other defensively because they move so much,” he said. “Lack of communication leads to that: a guy opens for the game-tying goal.”

“We’ve been working on that time-out play all week,” Minnis said. “Dennis is a scorer, and he’s going to draw attention. That left Charlie open on the backdoor.”

When Princeton can’t convert on its last possession, it was on to overtime. 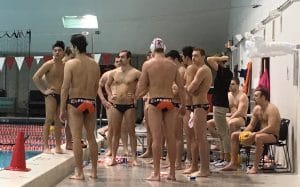 Jonas cited the Colina for Princeton and Blyashov for Harvard—both graduates of San Diego’s Cathedral Catholic—as likely overtime stars for their respective team. He was right, but it took three extra periods.

Tafur gave the Crimson their first lead of the match with a skip shot in the first period; Payne equalized a minute later with a breakaway goal. After a scoreless second overtime period, it was Blyashov who ignited a tremendous celebration of Crimson pride, beating Mitrovic for the fourth and final time with a golden goal at 2:23—sending Harvard to NCAAs and Princeton, dejectedly, home.